“We Only Feed You For the Sake of God”

As a book of guidance for the individual and society, the Qur’an often elaborates on virtues which qualify people as pious, faithful and righteous,  and worthy of being “servants of the Merciful”. Among these most beautiful of Quranic passages is one found in Chapter 76, known both as “The Human Being” (al-Insān) and “Time” (al-Dahr), which was most likely revealed in Makkah in the early phase of the Prophetic mission.

Our selected verses begin with a glimpse of the reward in store for the righteous, together with some of their most prominent character traits: both towards their fellow man and towards their Lord:

{As to the righteous, they shall drink of a cup mixed with kāfūr;
a fountain where the devotees of God do drink, making it flow in unstinted abundance.
They perform (their) vows, and they fear a day whose evil flies far and wide.} (Q 76:5-7).

The Golden Rule: An Islamic-Dialogic Perspective (2012)

Anyone with an interest in the philosophy of ethics, or in the common ground between different faiths and cultures, is very likely to be familiar with a dictum known as the “Golden Rule”. Worded in various ways, its straightforward message is to treat other people as you would like to be treated; or to refrain from treating them in a way that you would dislike to be treated. In this article, I shall explore the concept as it is expressed within the Islamic tradition, and then outline how the Golden Rule can be applied to great benefit in the broader context of interfaith understanding and dialogue. Before tackling these two subjects, however, the concept and its significance deserve some introductory exploration. 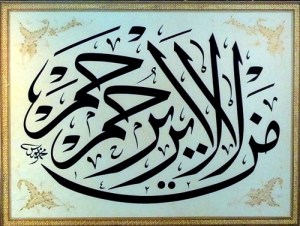 “Whoever shows no mercy is not shown mercy.” Artwork on display at Fanar Center, Doha

The above paper in Arabic is an extended study of the theme first explored in my English article, Brotherhood in Faith and Humanity. It was originally an assignment for my final-year class on Thematic Tafsir at Al-Azhar University.

O mankind, eat from whatever is on earth [that is] lawful (ḥalāl) and wholesome (ṭayyib) and do not follow the footsteps of Satan. Indeed, he is to you a clear enemy. (Qur’an 2:168)

And eat of what God has provided for you, lawful and wholesome. And fear God, in Whom you are believers. (Q 5:88)

Then eat of what God has provided for you, lawful and wholesome. And be grateful for the favour of God, if you do worship Him. (16:114)

After quoting these verses from the Qur’an, which – along with similar verses – call upon human beings and believers to eat what is lawful and wholesome, I am moved to share the following reflections:

Brotherhood in Faith and Humanity (A Quranic Study)

The significance of a concept in the Islamic worldview can be grasped by surveying its occurrence in the Qur’an, the peak of divine revelation and the fount of knowledge and guidance. One aspect of such study is to follow the appearance of a certain word in its various contexts, extracting lessons and drawing conclusions.

The concept of brotherhood (and sisterhood) is increasingly discussed in our times as a foundation for human equality, reconciliation and cooperation. Words pertaining to brotherhood (i.e. derivatives of the Arabic root ʾ–kh–w / أ–خ–و) occur in the Qur’an in almost one hundred places. This study looks at these occurrences, beginning with those in their literal meanings, and then outlining the various metaphorical senses in which brotherhood is mentioned. Then there is a specific focus on Islamic brotherhood in faith and the broader concept of brotherhood in humanity, with reference to Islamic scripture and the opinions of Muslim scholars.